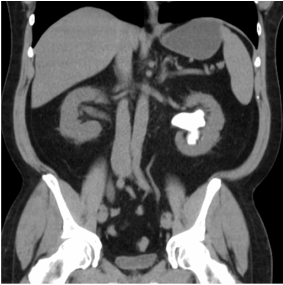 Even the largest of kidney stones can now usually be managed entirely endoscopically, avoiding most of the complications of traditional open or even laparoscopic surgery.  This is called a percutaneous nephrolithotripsy, or "PCNL".  In the operating room, a scope is placed directly into the kidney and the stone is seen under direct vision.  A combination of ultrasonic and laser energy is then used to break up and remove the stone.  This procedure has revolutionized our approach to large kidney stones to a tremendous benefit to those patients with large kidney stones.  This procedure can also be effectively utilized for smaller stones that are not able to be treated by other methods.


The stone depicted in this image, for example, occupied most of the left kidney.  A two stage PCNL was performed.  The below image shows complete removal of all stone material.  The ureteral stent seen was left in place for 2 weeks and removed in the office.  A 24-hour urine collection was done for this patient to identify underlying metabolic abnormalities that predisposed this patient to stone formation.  These were corrected and after several years of followup no new kidney stones have formed.

Before and after images - PCNL of large "staghorn" kidney stone